Inspiration for writing posts on this blog often comes from books I have been reading; this post is no exception. The book I have been reading is called Inside the O’Briens by Lisa Genova. I wonder how many of you have heard of it. 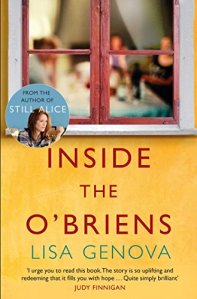 Next year I will have been making pots for 5 years and I am really still towards the beginning of my making life. I have been utterly driven and single-minded from the start. This is partly because I have come at it quite late, aged 42 when I first touched clay, and feel like I don’t have a moment to lose. I have reached this point through a rather circuitous route, although there has been a strong creative bent throughout. I am finally in a place where that creativity has coalesced, and it feels good. A number of people have asked me along the way what the hurry is – this is partly it.

It is also, though, partly related to the book that Lisa Genova has recently published. Genova used to work as a neuroscientist and is now a novelist. Her explicit intention for becoming a writer instead of remaining a scientist is the raising awareness of neurological diseases. Genova has spoken of the fact that as a novelist she can reach and affect millions of people. Her first book, called Still Alice, made into a popular film, was about a woman with Alzheimer’s. Her second book, Inside the O’Briens, is about a man with Huntington’s Disease. As a scientist, Genova comes at it from a factual perspective, which she weaves her story around. A man, called Joe, discovers he has a disease called Huntington’s Disease (HD) and we witness the ramifications that this has upon his family. It is written to be a page-turner and to be gripping, and it is both of these.

HD is a rare, hereditary disease where an individual gets passed a faulty chromosome from an affected parent. The mutated chromosome repeats itself resulting in the diagnosis of the disease. Symptoms are cognitive and physical – amongst other things, chorea (dancing, jerky movements), depression, altered mood, impaired reasoning and decision-making abilities. Onset of symptoms is certain, usually beginning between the ages of 35 and 45. Once the symptoms have begun, it is degenerative.

I have Huntington’s Disease. I have known since 2000, when I took a test to discover if I was gene positive or negative. I was passed the faulty gene from my father. All decisions that I have taken from that date can be viewed in light of this information. It is a question everyone asks themselves, ‘What am I going to do with my life?’ but when you know that ahead of you, immovable, is a degenerative disease with no cure, it brings everything into focus. What motivates each of us is a fascinating question.

My imperative on deciding to become a potter was to be the best possible potter I could be in the shortest possible time. Every hour at the wheel counted. I put myself on the line again and again, applying for opportunities beyond my level of skill or experience. Having not made a ‘success’ of things up to this time, I was determined to have a successful pottery business.

So, this last year has been unbelievable for a number of reasons, including four or five wonderful opportunities, all of which came at the beginning of the year, including being commissioned to make a bespoke range of pots, in response to the sculptures of Barbara Hepworth, by Tate Gallery to be sold in the exhibition shop during their summer Hepworth exhibition. As a consequence, it has been a year of hard work and incredibly long hours.

This is partly HD related. Maximise the opportunities! I am either outside the boundaries of average age of onset, or approaching it, depending on the measure (45 or 50 years old), I will be 47 in April. I am not special. The symptoms are not going to hold off just because my name is David Worsley. One of the difficulties of the disease is that both the symptoms and the age at which the symptoms begin are unpredictable. They are certain to happen but I don’t know when they will start. It is an incredibly hard thing to live with – and seems to be getting harder. I am someone who tries to find the positive in every situation, even if that optimism is misplaced. With this I am really struggling. An HD veil gets cast over everything. There is no reason at all why the symptoms shouldn’t begin tomorrow/today, or they could begin next year, in two years’, five years’ time. It will be a miracle, though, if I am still making pots in ten years’.

But, in the midst of these long hours, my work/life balance has disappeared and I regret this deeply. It is impossible to properly give yourself, as a partner and a father, with the balance that I have been keeping. I have been living a subsistence life, just getting by, just about doing enough. I could not have achieved any more. But this is not acceptable. My family is my heart. Having HD has an effect upon my time with the family, as well. It is incredibly precious time that we won’t get back.

My ambition for next year is to bring my work/life balance back to where it should be. The life of a maker is one of hard work and dedication, I don’t think there is another way, but it cannot and must not be all.

You are currently reading 08.11.15 at The Hopeful Potter.