Tonight, and I should be back in the workshop, I can’t wait. It’s been a troubling few weeks. When something like this happens – a fire in the workshop – it is a proper jolt to the system, a bit overwhelming – it’s taken time to settle. It becomes a natural break point, potential breaking point, and the question of whether to continue is all-encompassing. 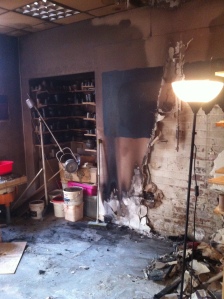 While waiting for the workshop to be refurbished I’ve tried to make sure I’ve sorted as much as I can, so that I will be up and running as quickly as possible. So, I’ve made new batts, sourced a new tray for my wheel, had the kiln checked over, done some admin, and the amazing David Ashby fired some pots for me.

The question of continuing is one of engagement, of wanting to engage with the physical and social world around me. I am situated in a real, material world – how do I respond to that? How do I exist within it? This enforced break has reaffirmed my desire to use my hands and to make things. In ‘The case for working with your hands: or why office work is bad for us and fixing things feels good’, a rubbish title for an intelligent book, Matthew Crawford writes about how and when the schism appeared between hand and brain, between cognitive and practical endeavour. He says that the wedge between them was driven in hard during the twentieth century with the rise and rise of consumerism. To live is to consume, to consume is to live.

According to Crawford, around the time of the first world war when Henry Ford opened up his first assembly line the work was apparently so repulsive to the working man, who was used to taking responsibility in his work, that in order to keep 100 men that were willing to work on the line he had to employ 963. In order to keep that 100 Ford learnt that he had to double or triple the men’s wages. Wages became the compensation. Consuming became the compensation. Passive consuming is a thoughtless, disinterested act, the consumer bearing little responsibility for his actions.

I don’t want to be a passive consumer. Engagement is at odds with passive consumption. It is an active choice, an affirmation, a desire to understand how the world works. It is to be curious, to care, to consider and be compassionate. It is to be a part of the physical, natural world. Maybe it is an age thing, a mid-life crisis. I don’t want to look back and feel that I have just been on for the ride. I want to have picked up the earth and rubbed it through my hands. 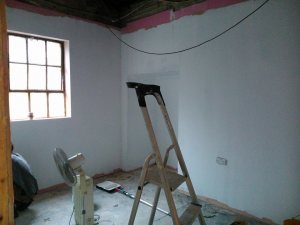 So, I am nearly there, back in the workshop and I am looking forward to working hard. I wouldn’t be back so quickly and able to pick up again if it wasn’t for the amazing work done in refurbishing the workshop by my landlord Q20 Theatre. They have been exceptional in their support and I am eternally grateful.

You are currently viewing the archives for May, 2014 at The Hopeful Potter.