Last week, I spent a lovely afternoon in Grassington, in the stunning Yorkshire dales, with David Ashby and Carine Brosse. Carine is an artist who makes fabulous work based on fairy tales and the wilderness, while David is an extremely talented potter.

David had promised me a lesson in making handles in the New Year but as he was in the process of attaching some handles to his own pots while I was with him, he gave me a quick demonstration. It was fascinating watching him go through the process and, consequently, it has got me all fired up about making my own mugs. There are two main ways to make a handle: ‘pulling’ a handle and cutting a handle out of a rolled out slab of clay with a tool. David uses the latter method and it was this that he showed me. 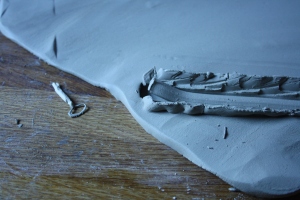 With a bit of fiddling and trial and error, you twist a length of wire (the one I used, and I think David did, too, was 0.9mm thick) into the required shape for your handle, insert it into the clay and pull in a straight line. Then, you neaten off the ends with a knife and leave to harden a bit before attaching.

The mugs I’m going to make will be in two sizes, the smaller being the same size and shape as my current salt pots (an idea given to me by someone who came to a fair I was participating in). So, in the picture the pot is approximately 4cm across x 5cm high, quite small. Initially, I had thought the handle would be attached at the foot and the lip but practically it wasn’t going to work, as the space inside the handle was too big for one finger and too small for two. The handle in the above picture is, I think, too round compared to the more angular pot. 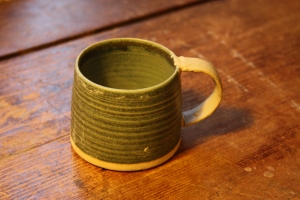 It was also too wide compared to the lip. 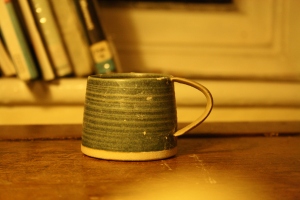 I think this shape is a bit better, I think it would fit the finger better. The idea of this placement is so that you could hold the mug with one finger through the handle and the next finger down resting just under the handle on the foot. Or you could use the handle to pick up the mug with one finger and the next finger down rests under the handle. It is really important to get the weight and feel of the handle to match the weight of the rest of the mug, so that the pot is all of a piece. Because I have attached the clay handle to a finished pot, I cannot pick it up, so it is very difficult to tell whether this one feels right. My suspicion is that it is fractionally to big/thick, but only fractionally.

I have really enjoyed trying out the handles and it has made me eager to have a go for real. It has also made me look again at the range of pots I make. I think adding mugs will give the range a lot more purpose, and clarity. Other items, which are currently a bit ‘what is that actually for?’, will then come into their own, especially the beaker and cup (which have had to take on too many guises), and the salt pot, which I’m going to make slightly bigger, so that it becomes a sugar bowl. Having more understanding of the range is much better for me and, I think, will be better for my customers, too.

You are currently reading 03.12.12 at The Hopeful Potter.